Since before I can remember people have been back tying their dogs during protection work, as this increases drive through Opposition Reflex created frustration. This has the ability to unlock huge amounts of drive in your dog, right up to your dogs genetic ability.

It can take many small steps to produce a dog that goes hard for as long as you see in this next video, some will not going to drive because they are wearing a new harness, so you will have to acclimate the pup to wearing the harness over a few days possibly weeks.

Some will hit the long line and think they should not pull, it will help these dogs to play prey games with long line dragging and have a helper pick up the long line once the pup has gripped the tug and pull back with a little pressure. 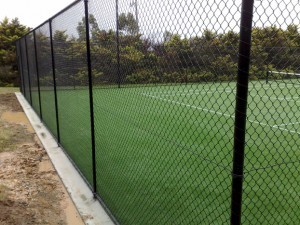 I like to use a Bungy for this work where possible, you can also tie your line to a chain mesh fence so that it will stretch when pup pulls on the line, lessening the impact.

See this video of a young Herzhund Pup giving it a read hot go.

You will see all the elements take place of a strong prey game: –

Engagement: we want pup to fire upon verbal cue before becoming lured or engaged with the tug

Chase: The tug will be hard to catch and only efforts of 100% will provide success.

Capture: The pup must grip the tug with power and commitment to prevent losing it.

Fight: The prey will not want to be caught, it will fight and try and escape the grip.

This video demonstrates what the same puppy was like at 8 weeks.

You can see handler technique has remained consistent and the results it has produced in the first video.

Make sure your puppy wears harness long before you expect this result. I would have the harness on pup all day every day until pup forgets it is on. 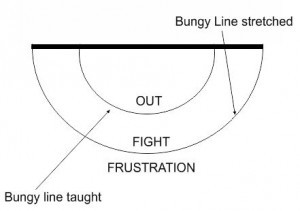 Let pup drag long line until the same results are gained, puppy forgets it is on.

Establish a prey game such as the one in this video.

When all these are going smoothly and will reliably trigger, it is time to back tie.

Working the back tie tips.

When you connect the pup to the back tie, A frame the line to prevent jerking / correction type restrictions.

Start game in OUT zone, so that you are not triggering drive by tight line. Once Drive is triggered step outside into the FRUSTRATION ZONE and tease the pup by moving the toy vigorously just millimetres from where the pup can grab it.

Once you see drive peaking drop the toy into the capture / fight zone and when pup captures toy, fight.

Move into the out zone to take tension off the line when you ask for the OUT.

Fighting is proportionate to your pup, if you have a confident prey monster the fight will be more physical than if you have a dog that is gentle and lower drive.

Don’t expect a dog that is wild from the first session, this is a Conditioning exercise that is developed over a number of repetitions. Be patient and get as your pup has to give.