This is a system I have developed to avoid creating problems with the cues and commands we will use in later life.

It looks like this from a pups point of view.

This without question does work, but there are a few things in my training that I think are a lot better.

First is that I want the pup to want to do the exercise, by that I mean I will use advanced luring to shape the dog into a sit. The second is that I will not say anything but yes when the but hits the ground.

The third is I will create a session so that the pup thinks that he or she came up with the idea to sit.

Later when my pup is throwing sits at me, I will LABEL the behaviour and cal it SIT. This way by the time I start saying thye sit cue, the pup already: –

Its then and then only do I Label the behaviour. 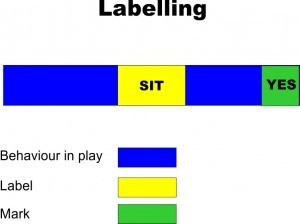 Later, perhapos a week or so I know the pup knows the label, I can alter the timing to switch the label into a cue, as below.