I believe to have useful engagement you need to have solid communication with the dog to help the dog understand where about in the process or the routine you are. Are you ready to start a routine? Ready? is your dog doing what you asked “target behaviour” but you want the dog to keep doing it? Duration?

Has your dog met your requirements and are you ready to reward? Yes?

Did you dog make a mistake and you need to stop your dog following that train of thought and start again? NRM? 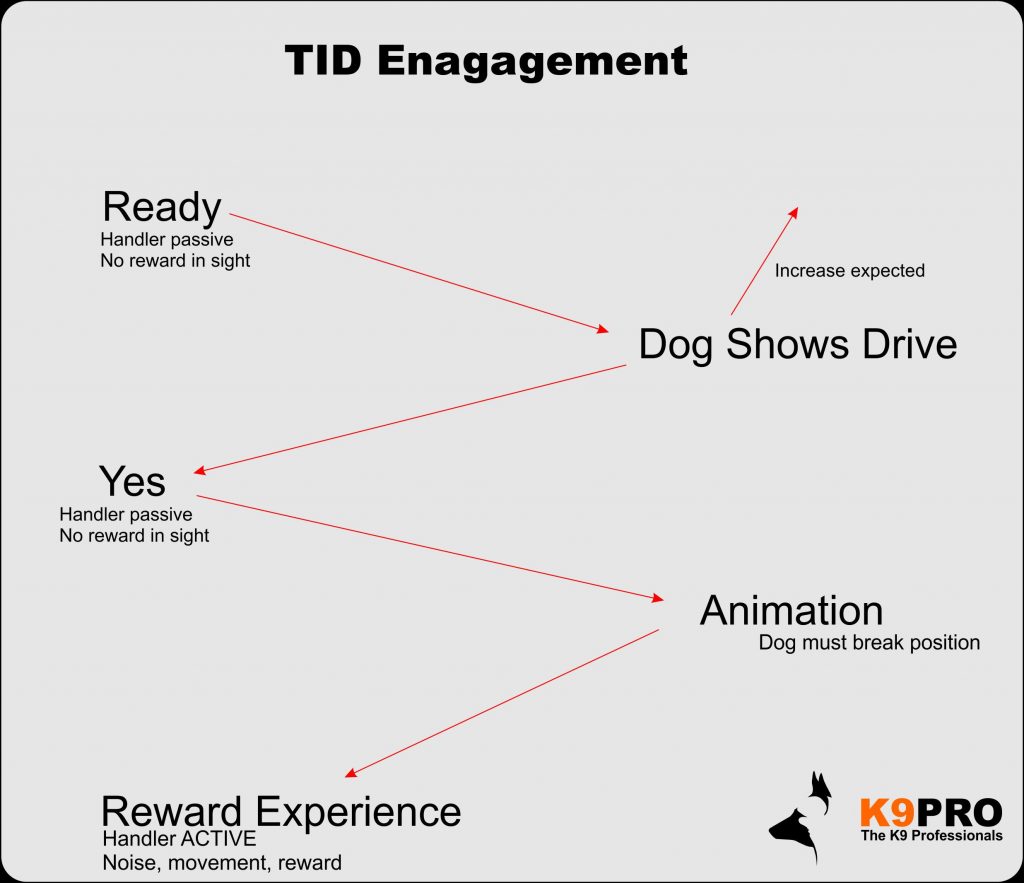 The Walls of Engagement

These help surround the dog with self imposed limits which replace the physical limits we may usually use such as leashes, barriers and long lines etc.

The problem with physical limiters is that they can easily introduce frustration in our dogs which elevates drive and desire.

So let’s say that you were asking your dog to search a building, and the dog wanted to search outside or to go outside and access play with another dog. If you hold the dog back by the leash and rob him of this reward, the dog won’t actually want to access that distraction any less, in fact it may want to access it more due to the restraint elevated drive.

Drive is not elevated by restraint frustration for the dog outside, but instead its value disappears in favour of the expected reward (the one promised when you said “Ready”).

This system I have created helps me contain the dog within his or her work ethic and saves using or needing physical restraints in many cases. This later transfers to power when the dog is working at a distance from you, as the Walls of Engagement are not physical, they have no real size limit, so the dig could be for example going over a jump 50 metres away and still receive communication form you.

This is the most important part of the process, because I have seen many programs that have good communication systems (clicker training for example) but they do not have the same power and control of my program because often the reward is just handed over.

When a dog is cued to sit (just an example this could be any behaviour), and the dog complies and we give the dog a food reward, this is known as Classical Conditioning.

Classically Conditioned Rewards generally produce dogs that offer behaviours slow with little motivation. I find this type of conditioning useful for crate training, box training etc but not much else.

Whilst most people who train dogs for performance agree, they can easily get caught out rewarding their dogs classically by handing over food.

You will notice in this next diagram that I have a physical step between the release marker “yes” and reward availability / delivery. That step is called “animation.”

So I will cue my dog to engage with me “ready”.

Then I will give a sit cue if the dog has shown me drive after the ready cue.

The dog sits and I mark / release with YES.

The dog must animate, what does this mean? It means it must move.

This movement requirement stops me from ever rewarding the dog in position or even reaching for the reward, because I will not as much as reach for the reward until after the dog has animated.

This is the most common problem I see with people in my system, they say ready and they are diving for the reward before the dog has responded. This causes the dog to “sign track”. Sign tracking is a behaviour the dog learns to predict access to the reward.

This is most commonly seen when people ask their dog for a formal recall and the dog recalls and sits in front, pointing toward your right hand.

If I mark my dog and release him he predicts the Reward Experience. This is not just the Tug Toy, the Bite Suit, Sleeve or anything physical. It is a combination of factors that come together to create an experience that is not able to be replicated by anyone else or anything else.

The components of my Reward Experience would be: –

The whole premise of Training IN Drive is to utilise the dogs instincts to reward him or her, to design a reward and build reward history the dog cannot access any other way with any other person and to defeat the dogs desire to possess an item and create a dog that wishes to share an item through handler engagement.

When you look at the diagram, it helps us to identify what levels of energy we are at and what responsibilities are held by each member of the game (the dog and the handler).

Whenever using food or toys I want the dog find them exhilarating so I will move them fast and have the dog chase even food like prey. This boosts the value of the food well beyond taste and or hunger.