Steve has known Belinda since around 2006, he has a soft spot for Eddie who is what Steve describes as the Muscle Machine. Belinda has subsequently embedded Steve’s Training in Drive , Motivational Training System into all of her dog sport activities.

We first met Eddie when he was a tiny puppy at the breeders in 2005, we used to go visit him each week and just sit on the floor and watch him and play with him. When he came home he was the perfect puppy, so well behaved, and oh so serious.

Eddie was my first ever dog, so I really had no idea and we started obedience classes at the local obedience club, which was a very traditional style club, check chains, corrections, and not enough praise, or excitement.

Ed was quite anxious, and very serious, and seemed to shut down quite a bit with this type of training, so I embarked on a journey to try to find something that we were both happier with. I joined a few other clubs and took bits and pieces of all of them, I learnt clicker, I tried doggy dancing, I used dogzonline for advice.

In early 2008, Steve came down to Melbourne to do a workshop “Take the Guesswork out”, so I booked myself and Eddie in, and our lives have never been the same again!

I was already part way through his CCD title when I started training with Steve so I finished that off to get stuck right into it my new training. My husband thought I was mad at the start, he thought I was just making Eddie out of control and a big pain in the backside, but as his training came together he was totally impressed and said it was the best thing I’d ever done

This is Eddie working with me later in 2008, totally ignoring the distraction of my husband who feeds him dinner every night! https://www.youtube.com/watch?v=MtbpPhnqCO8

I entered him in the Novice ring twice and he scored well and got 2 passes. I then found out I was pregnant with our first child, and because extremely nauseous so the physical drive training took a bit of a break.

I did continue on with his flyball training however, and the dog that used to run down to the box like lightning to get the ball then stand and shake it before trotting back turned into an absolute machine, he would fly down, and fly even harder back to get his frisbee, he picked up over a second in time and became what we think could be the fastest Stafford in flyball in Australia

We concentrated on flyball for the next few years, and also added an endurance title and a weight pull title to the mix, everyone knew when Eddie was racing, they could hear him from miles away, screaming in excitement!

In 2013, a few weeks after he sired a litter Eddie collapsed, at the time we thought it was just the heat, but the vet wanted to double check and did an xray which showed some compression of his T12 disc. We took some more xrays after some rest and they showed no improvement, and he was starting to drag his back nails when he walked, so we went to a specialist and got a CT done. 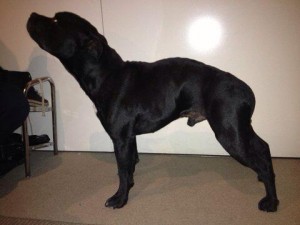 This showed us the devastating news that he had ruptured his t12 and bulged his t13. The news for treatment was just as bad, the treatment for a bulge, and a rupture are different, and the surgeon did not think Eddie was a good candidate as the only way we could try to fix both was to fuse 4 vertebrae together, putting the discs at either end at an even greater risk of bulging or rupturing.

We decided to go with the surgeons suggestion of conservative treatment and hope for the best. He was strictly crated for 2 months and we crossed our fingers that his body would try to heal itself. My heart was broken, his rear nails were scraping and his legs would occasionally collapse under him, and I can’t even think about how to be without him, my friends were almost scared to ask how he was going, as there was no real answer except to wait and see.

During this time Eddie’s condition had deteriorated significantly, he’d lost most of his muscle tone, his skin had flared up with rashes we couldn’t get rid of and he looked depressed, he looked like a neglected pound dog, but there were not many options, we couldn’t risk him hurting himself again, we played hiding food games with him, and he did some physio and myotherapy to try to regain some muscle tone, but life just wasn’t the same anymore for him.

During this time we also brought Frankie home, my pick of the puppies from the litter Eddie sired (with Steve’s help via video and the Volhard puppy temp test), she was exactly what I had hoped for, all of the drive of her dad, and a little smaller and more agile. Without Frankie I don’t know how I would have coped with the stresses of Ed’s recovery.

In late 2013 Steve and K9 Pro came back down for a workshop and I decided to go with Frankie, which was fantastic, Frankie loves her training, and I was ready to get back into it. At this

workshop I met Henna, another Team K9 Pro Member with an awesome Dalmatian who had also been having great success with Steve’s System.

This was exactly what I needed, all the work I’d done previously with Eddie had been fantastic, but what I’d really missed was someone to do it with, someone to run ideas past and someone who knew the training and could watch and tell me what they thought too we started training each week and invited along a few of the other people we’d trained with at the workshop too

I started bringing Ed back, being very careful at first and modifying his work so that he wasn’t throwing himself around too much, and he totally thrived on it. His condition has improved, his coat cleared up and he looks happy again! He’s gained a fair few years’ worth of grey hairs on his handsome face, and he occasionally loses his legs a little, mainly if he shakes or sneezes while walking, but an outsider would never know what he’s been through.

I have now just started trialing with him again, he gained his Rally Novice, and then his Rally Advanced title with ease and some great scores and we went back in the Novice obedience ring for the first time in 5 years, he worked so well, showed plenty of drive, no dropping off like he used to, he gets lovely comments about how nice he is to watch, he was a bit too enthusiastic and anticipating things like his recall, but really, there are much worse things that could go wrong!

Ed gained his Novice title and won the ring, making me so proud I could have burst!

He is current doing a little more rally with a pass towards his Excellent title last week and we will be working on the Open ring in the new year, most importantly he is HAPPY again we are having fun, and enjoying each other and the company of our new friends in Team K9 Pro!