Steve has been working with Henna since 2010, Steve started training Henna via his online Training in drive course at the time and thought that Henna would be the perfect owner for one of his Herzhund Malinois.

When I first contacted Steve back in 2010 I had no idea what I was going to be in for. Training In Drive (TID), I thought, I’ll give it a go, it might be some quickie course in how to magically convert my insecure, soft nerved, quiet Dalmatian Jaime to a dog that might just be able to ‘hold it together’ to pass a few Novice ring runs to get that title.

I hit the send button on the e-mail and a week or two later Jaime and I started on the journey. Needless to say I am glad I did; Steve’s training system has converted my way of thinking about dogs, training and life and the journey thus far has been nothing short of amazing. 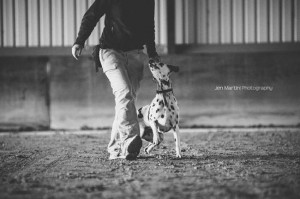 Jaime completed four modules of Training in Drive within two years of starting, and went out to compete in ANKC obedience and Rally-O to successfully gain her Novice titles in both.

She blitzed the obedience ring with two Highest in Trials, one at the Dalmatian Nationals (195/200) to become the 2012 National Obedience Champion, and the other at the Dogs Victoria Open Easter Obedience Festival (197/200).

She consistently performed in the ring with an average score of 195/200.

In her Rally-O debut at the Victorian State Trials in 2014 she did some neat work to narrowly miss out on the State Novice win placing second in the ring by a mere 2.04 seconds, with a score of 99/100.

The ring successes were secondary to the fact that after and during the Training in Drive course, Jaime’s behaviour had actually changed a lot. Through Training in Drive she developed confidence, assertiveness and speed.

This was far from the pre-Training in Drive Jaime I used to know, who would melt if she felt the slightest bit of stress, quickly falling into avoidance making training impossible; all of this was stemming from several fear-based issues.

Jaime is currently in preparation for advanced ANKC rally-o and obedience trials as well as tracking.

At the beginning of 2014 Agent (from the Herzhund A litter) entered my life. After several discussions, he was specifically chosen for me by Steve as I embarked on an entirely different journey 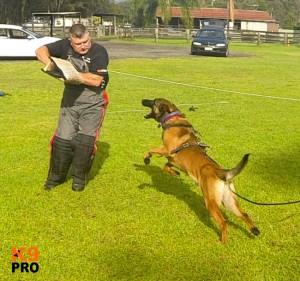 altogether, which would build on and test all the Training in Drive knowledge I had gained over the years.

He is a lot of dog, who demands respect and won’t perform for just anyone with a toy or food!

Apart from setting the life skills foundations and neutralisation, the first three months were critical in me finding out how to actually effectively motivate and form a bond with him.

Steve was there to guide me to make this critical transition as a handler, as well as allowing me feel my own way through concepts with Agent taking the teachers role.

As a result, I now feel that Agent and I have a very deep, powerful and satisfying relationship. Agent is in preparation for the IPO sport and some ANKC disciplines. 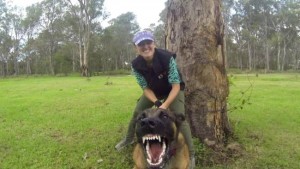 Being a part of Team K9Pro means a lot to me and my dogs (aka “Camp Derpybung”). I love watching (and helping whenever and however possible) the Team progress in training with their dogs. To be able to share the challenges and joys of training our dogs with such dedicated and down to earth people is very special.

Steve is very supportive and a great mentor. He inspires me with his teaching and handling skills. He knows how to get results. I am looking forward to achieving many more milestones in the future!

Here is Henna and Agent in action.