Steve began working with Katie and Paddy when Paddy had no recall and was hard to catch when let loose. Steve started the little guy in his Training in Drive System and they have never looked back! Scoring an almost perfect 99/100 in the first ever Obedience Trial, Paddy is a Rockstar!

Paddy was the first puppy I bought for myself when I bought my house – and those who know me will know I was much more excited about the dog than the house! I had always loved Schnauzers, particularly minis and knew them to be friendly, smart, lively little dogs, I figured that by doing all the “right” things I’d have a friendly, well behaved little dog which hopefully I might be able to do obedience and/or agility with.

Paddington arrived and was an adorable bundle of black and white fur and was an absolute live wire. He LOVED everything and everybody but even at 9 weeks old had an independent streak and a real “make me” attitude about him if my plans didn’t happen to line up with what he wanted to do.

I made a massive effort to get him out and about everywhere to meet lots of people and dogs and expose him to as many situations as I could think of, as well as taking him to puppy preschool followed by obedience classes .

By 6 months of age I had a an over the top excitable little dog on my hands. He was absolutely smart, and had an impressive repertoire of tricks and commands he was more than capable of doing, provided there was nothing more interesting about.

His recall was what could only be described as abysmal and I had chased him down a number of times after he’d slipped his lead to go off and make friends or chase the birds. I was all but invisible once we left the house and obedience classes had gone downhill, I’d gone from having the smartest little puppy of the class to the class clown, lurching on his lead from one dog to the next in an effort to make new friends. He certainly wasn’t the same liability as a larger dog with his behavior might have been but I knew I was out of my depth and needed help.

I forget where I discovered K9Pro – I think probably a frantic google search to find reputable trainers in the area. Thankfully he wasn’t far away, so I booked an appointment, packed Paddy into the 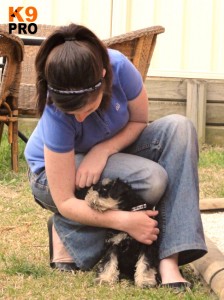 car and off we went. I remember Steve saying quite early in the piece that “Paddy could be either an awesome performance dog or a nightmare to live with depending on the work and training we put in place.“

I knew which option I preferred the sound of and so we started Training in Drive, firstly to overcome the problems we had. It took time, but we’ve gotten there and we’re now working on competitive obedience.

Paddy absolutely LOVES training in drive and the complete distracted behavior we had while out and about is a thing of the past. He now has an awesome recall and is capable of working off lead in really high levels of distraction with no problems – the hard work and long process to build the foundations and relationship has paid off in spades and Paddy’s trust in my ability to find his reward is humbling.

At the time of writing this despite my initial doubts Paddy has successfully competed in his first couple of Rally O competitions and will hopefully be hitting the obedience rings at the start of next year. (First time in the ring 99/100, second time 98/100)

We’ve been so supported by Steve from start to finish and he’s always been so patient with both me and my little monster. He is always genuinely happy for us with every little breakthrough we make even if he is a little too pleased to hear me tell him that “you were right….again“.

Steve has such a natural ability and talent both handling and reading dogs and is probably Paddy’s all time favourite friend, to the point that Paddy recognizes the driveway and just about explodes with excitement as we arrive for our lessons.

Steve is always really generous with his time for us and is my sounding board for all things dog whether that be diet, training or whatever and his pointers helped me integrate my little senior citizen rescue schnauzer, Albert, into our household and smooth out the bumps that we hit as the he settled in.

Team K9Pro is an awesome initiative of Steve’s and has been invaluable for me in terms of negotiating training hurdles, introducing me to the world of trials (who knew the paperwork involved was almost as complicated as training the dog!) and being my super supportive cheer squad at our very first trial.

Paddy and I are looking onwards and upwards now, with all sorts of grand plans in our future. Steve has well and truly changed my outlook on dog training and really  when I watch Paddy prancing along beside me, eyes lit up and hanging on my every word and movement, the results I’m seeing speak for themselves.

Check it this related article