Steve met Nicole when he was running a Training In Drive Workshop in Gympie, QLD in about 2006. Steve noticed Ella as a little puppy and he saw her potential right there.

I first encountered Steve around 9 or 10 years ago on an online dog training forum where he would occasionally post comments. It was clear that he had a different way of doing things and his comments about training in drive certainly piqued my interest.

I had previously competed, with moderate success, in both competition obedience and agility with other dogs but I suspected that Steve’s Training In Drive program would give me a more competitive edge! 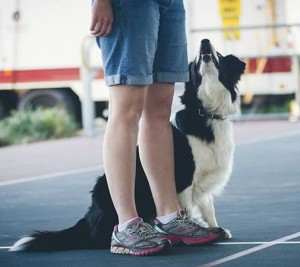 So, when Ella arrived a year or so later as an extremely smart and equally naughty 8 week old puppy I knew that I had a potential super star on my hands and that she was the perfect candidate for Steve’s program.

The problem was that I was in QLD and he wasn’t… as with everything else, this was not a problem for Steve and we embarked on a Distance Learning Program, guided each step of the way with email coaching from Steve.

Ella surpassed my expectations in Competition Obedience and breezed through CCD, CD and CDX. After a year break for a litter of puppies and some training and she hit the UD rings with a bang, completing her Obedience Champion title in under a year and winning the UD class at the Obedience Nationals along the way.

It wasn’t until after all of this and a second litter of puppies that I actually had my first one on one lesson with Steve which was only to fine tune some small issues that were losing us a couple of points here and there in competition.

This alone proves that Steve is an incredible teacher who can still show you the path to success without a face to face lesson!

I was invited to join Team K9Pro a year or two ago and it’s been a great source of encouragement, motivation and learning. It’s been great to connect with people who all train like I do, and it’s always cool to be a small part of everyone else’ journeys in training their dogs.

I’ve made it to a few of the training days that Steve puts on and they have been awesome, they are bit like a workshop only a whole lot better!

Being part of this team pushes and motivates my training and Ella’s recent success at the NSW State Obedience Trials is due in part to the motivating force of this team. I’m also now training Ella’s daughter Blink who I plan to compete with mid-late next year.

All I can say is: Are You Ready? 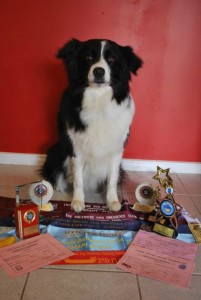